That was my life in a nutshell up till three and a half years ago.
Loretta made an excellent point yesterday in her comment.
I know how far I've come, but many of you don't.
I know some of you are new(er) to this blog..

At one point in my weight loss journey, I nearly fainted from anxiety while being flirted with by an overly ambitious and obnoxious lotion salesman at the mall.

It was my first real experience with flirtation after having been cocooned in my fat layer for nearly 15 years.
It was a humiliating experience.
I tried to laugh it off...but looking back now...it was a blessing in disguise.
It was THEN that I realized the extent of my fear of men, and knew I had to do something about it.

So, I took a self defense class.
It was a one off class to strengthen my sense of self sufficiency, I didn't think much of it before I went..I certainly didn't think it would be life altering.

But in many ways, it is the small decisions that can lead to the biggest changes.
Many times, the difference between success and failure is the willingness to cross over the line of comfort into discomfort.
And that line is almost always the line of fear.
False Evidence Appearing Real.
I was very anxious at the thought of taking that class.

It was a marked pattern in my life, up to that point.

If I had anxiety, I avoided the situation.
The problem with that strategy was that my anxiety didn't stem from reality...or external situations.

My anxiety stemmed from my internal dialogue.
From a faulty pattern set up from a childhood of abuse.
The patterns of chaos and fear were created by an angry,fearful and chaotic person.

What you feed, grows.

I fed my fear.

I used my childhood as a basis with which to judge relationships. As a consequence, you couldn't get me to commit to anything except the people who had proved themselves trustworthy.
And being that I did not go out much, do much, or participate much...that was quite a small circle that WAS GROWING SMALLER BY THE DAY..

By the time I decided I was worth the effort, I was 130 lbs overweight and couldn't tell you what I wanted out of life.

Hell, I couldn't have told you what my favorite color was..
(BTW: It's aqua) 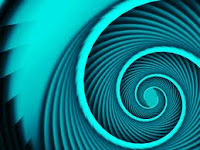 It Isn't some magical moment.

It's a realization that something needs to change.

Many people stop right there, I did many, many times.

Here's the trick.
Within you will be two voices.

One that says 'Don't bother, it won't work." "What if it fails'..and "You aren't worth the effort." That is fear talking.
That was the program I had followed.
I felt I had no real control over my situation or my future.
The best I could do was persevere...the idea of creating something never even occurred to me...I was still functioning from the perspective of a child who had no ability to choose without even realizing I was doing it.
It was F.E.A.R.
False evidence appearing real.

You know how you kick it's ass?

You listen to the other voice in your head.
It may be a whisper..Maybe after years of feeling hemmed in and stymied...the voice isn't very loud anymore.
Maybe that voice was replaced with a tape made by an abused and abusive person.

But nearly every human being who is currently residing on planet earth still has a sliver of it...because when they stop having it they kill themselves or go insane....

That is the voice of hope.

That is the one you listen to.
You listen to it and do it...and then the next time there is a decision to be made...you listen to the voice that affirms you, not belittles you...and so you go.

If you are ever uncertain about which path to take.

You listen to the one that says yes to you, yes to life.

When I listened to the voice of F.E.A.R.  I never joined in. I never went out. I never began new ventures or made friends.. Or tried new things. I had created a safe circle from which I could scurry out, grab what would maintain a minimum existence, and then I would scurry back home. Everything I did was fear based. I told myself I was being smart, or canny. But I was basing my life decisions, relationship decisions..on faulty evidence... As a result, my life was home..TV. obesity. one outside friend. and a feeling on a daily basis that I was being buried alive and had no idea who I was or what I wanted.

Then one day, I decided to lose weight on purpose... The thoughts in my head that day were manifold...but the one that stands out the most clearly was this thought: "I deserve better than this." That was the voice of hope... And when I followed it my world got richer and larger and more wonderful. More friends, A church home, healthy, happiness, self knowledge and a sure path to my future.

Listen to Hope.
Chris out.
Posted by Christine at 10:04 PM

I hope you realize just how awesome you are, Chris.

Dittos to what the two previous scatological commentors said! ;-)

I know it's been a while since I've been by and let me just say it's pretty fantastic that this is the post waiting for me to read when I come back to see if you're still blogging!!

What a great way to give a synopsis of your story. And I love that you have positive advice to share. You really are a force for good!

Every time you mention that flirtatious lotion salesman I laugh. I know I've apologized for that before but it makes me smile each time.

I agree you are definitely AWESOME. I've always had a fear of hights. You can't imagine the happiness I felt after completinig an obstacle course with a 50 ft drop/slide. It's liberating when you can face it head on.

It is always a pleasure coming to your blog. It's like CHURCH.

I just love you. you are amazing in every way!