Why people are crapheads to wait staff.....

okay,
So I had a higher calorie day (and an equally grand workout I might add)...and I am at my favorite local establishment waiting for a seat.
I am behind a dude who is rude.
He is ordering to go....and he is condescending, abrupt, and generally a crap head.
He special orders everything, he repeats himself loudly, he sighs...
He says "GOT That?"
Then makes her re total the bill twice....and then realizes she is correct..
THEN runs a card that doesn't work and blames his wife who is conveniently absent...and leaves.

I pondered this....and have come to the conclusion that some people feel so small they endeavor to make others feel the same way.
What an irritating encounter.
I don't know what it is about people like that, but it makes me want to be twice as nice.
You know, waitresses and waiters have very hard jobs.
They deal with angry people....and take abuse for poorly cooked food....that isn't their fault.
They are on their feet and their pay is attrocious.
It takes two seconds to say thank you.
It takes as many words to speak nicely as it does to speak meanly.
It takes more muscles to frown than to smile...
and to reach back into my bag of snark...
yes, I am doing it... 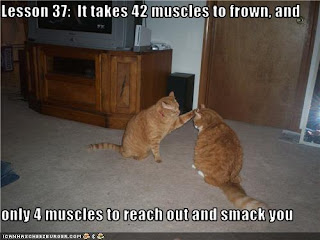 And so, douchy guy with bad 80's mullet....consider yourself virtually smacked....that is all.
chris out.
Posted by Christine at 10:19 PM

I think being a GOOD* waitress is one of the hardest jobs in the world, beaten out only by being a nurse's aide in a hospital. Ack.

*Most anyone can be a bad waitress.

Loved the cat picture. I'd like it printed on a t-shirt please. :D

And thus is my longstanding habit to overtip the living hell out of waitstaff explained. On your feet all day and night, and dealing with PEOPLE. I try to make it better for them.

Mom to the Fourth Power said...

Well said. I hope he reads this post too!!

I am one to always thank my waiter or waitress again and again. I am thankful they are serving me. But then I will say I have had a bad waiter or waitress and that does get under my skin because I think all of us should do our best at the job we have. I am a generous tipper when deserved and still a good tipper when not the greatest service because I know it's still a tough job.

Interesting commentary on people. Makes you wonder. Did this guy have a bad day, a string of bad days, a bad year, or is he always like this? Does he always blame his problems on others? Take out his frustrations on other people who have to be nice and can't head him his head? As for waitressing, it is a tough job. And I am very appreciative of someone who does it well. Not so much of someone who stands around yapping with the other wait staff while my food is chilling under the heat rack or my glass is sitting there empty when I am really thirsty. In other words, my tip always reflects the quality of service I received. If everything flowed pretty well, I am happy to tip 20%. That means my dinner was hot, my glass was always full, etc. If I had to flag you down, chances are it is more like 15%. And if my food is cold and my glass is constantly on empty, you are hovering somewhere between a tip on my napkin and 10%.

lol robin. I am the same way....I like the wait staff at this establishment. They are very busy but are always unfailingly polite. And you nailed that guy on the head. He does seem like the guy who blames everyone else. That was my overall impresson.

One of the people in my life that I was most impressed with was a single mother that was making a living as a waitress. I knew her personally, so knew her hard life.

Yet, she was the highest tipped waitress this restaurant ever had. I asked her one day her secret. Never forgot her answer (paraphrased):

"I am a professional. When I come to work, I Ieave my problems at the door. I smile and give the customer my best, and try to make them feel special. I am a professional, and proud of myself and the job I do!"

After that, I try to give the best tip I can afford, when deserved.

Yep, he's the guy whose wife is on a shoe string budget and when she goes to buy milk finds out there is no money in the bank because her jerk she married is going out to eat daily! My son once wrote a poem about these people when he worked in fast food. I will step up to them because it just upsets me to see people treat others so badly. Greaat post Chris, thanks!

Blogger love for you at my place :) God bless you!!!