pictures of my art... 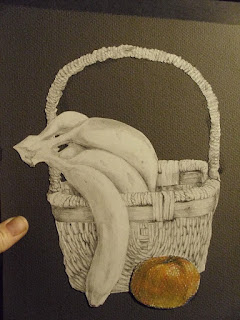 The basket and bananas were fun...the cutie not so much. 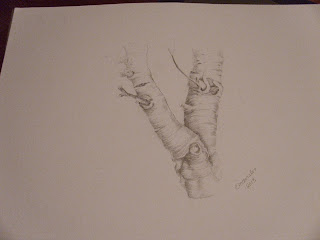 Above is a study of a birch..while I drew this at barnes and noble I overheard a conversation about conspiracy theories...I don't know what it is about drawing...but after a while you seem to disappear and people say the darndest things. 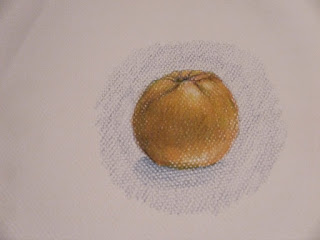 okay...those look crazy just uploaded...lol...some of my art I've been working on..just thought I would post it.  Whatever anything else may look like...the orange was the most difficult thing to draw...the first picture was a basket of bananas..and I had two cuties sitting at the bottom. I never thought about an orange before..or how to draw one...by the time I was done..I had managed to draw two orange lumps of indecipherable nothing. I cut them off the bottom of my picture..what you see there was the end result of three days of trying to draw a realistic orange...or in that case...realistic cutie.  To draw an orange... Use textured paper with dots...make all your lines curvilinear...follow the shape of the orange in a verticle manner with the lines curving in at the end...leave the highlights bare.  Underpaint with the complimentary for the shadow...so for orange...blue...and note that oranges have hints of green...do tonal till the end and then use lines for definition.  This week was texture...the next week or two will focus on perspective...also known as the bane of my existence.

Tomorrow will be my week in review on the eating and exercise front...
Chris out.

Enjoyed seeing these... my favorite is the birch study. Fantastic!

Perspective... aagh. Geometric shaped stuff, not too bad. But wheels, ellipses, curved stuff... after all these years, I still struggle with those!

Thanks for sharing. I enjoyed... What fun it must be to create. Great job!

Nice stuff! I bet it feels so good to get back to some things you love doing.
It can so frustrating trying to get what's inside our head out onto a medium. Sometimes the simplest things make for the best lessons. Thanks for sharing a little more of what's inside you.

I loved these! Lately it seems that artists think that they have to get distort what they're painting to send a message or leave an impression to prove they have talent.

That banana/basket still life is phenomenal. The birch tree is also my favorite, tho. I have a leaning towards pen/ink drawings.

Even with paintings, I like to see the "sketch" in it, the lines..crisp and clean.

So glad I stumbled upon this.