Well, I am about 12 days into my sixth month of my new lifestyle. I was 210 lbs on October 18th.
I don't know what I am now, but I know I am closer to 200...to under 200, than I was 12 days ago. In fact, this is the lowest I have been in nearly 9 years. (I am trying not to think about it too much.)
The last two days I have eaten on average of 1340 calories.
I have just been too busy to really eat. I have been eating breakfast, coffee, dinner. Big dinners. Then I am full and I am not going to force myself to eat just to eat. (so unlike the old me...)
So, the last two days I have been on the precor...here, lets see if I can find a picture..
. 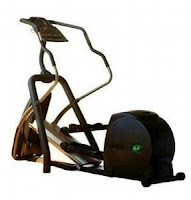 Thar she blows.
That's the thing I hop on about four days a week. It's an elliptical that goes up and down. I love it.
If I want to work on muscle toning I up the resistance.
If I want to work on speed I lower the resistance and go faster.
If I want to work on my rear end, I elevate that puppy to fifteen and go to town.
It's awesome.
I am so ready to burn this fat off.
Nothing feels better than looking better than that snotty chic who used to give you sneering looks....(slight variation on nothing tastes better than being thin feels...which is complete and utter bullsh*t)
Sometimes It is frustrating to still be fat when you have lost a lot of weight already. I know this, I read it on other people's blogs. I feel it daily when I look in the mirror. The mirror that says, yeah you look better...but honey, you're still fat.
It can get tiring to think about. You are ready to be killer hot now. You are working ten times harder than half the skinny chicks in that gym, and still you are fatter, are indeed considered fat. Maybe even given looks of derision as they hop onto the machine next to you...only to leave a half an hour later with a puzzled expression plastered on their faces that says, "Did I just get my butt kicked by a fat chick?!"...
The answer to that would be YES, You DID.
Cause right now, I have a pretty good cardiovascular system sister.

I just have about 80 lbs. of coagulated bad choices sitting on my *ss.
But not for long.
If we just keep plugging, we will get where we want to go.
I am ready for it. Are you?
Yes, I have lost over fifty pounds, yep...that's great.
I want it all gone. I want to win. I want to kill this fat and stick it in the Dust bin of history.
I want to prove to the *sshole who once told me
"Once women get pregnant, they get fat. Enjoy your life now, you'll never be this thin again."
Up till now I have proven him right. I am going to prove him wrong.
I want to be the recipient of envious glares from overweight insecure housewives (having given them, I know what they look like :0).
I want people to think I am 'naturally thin'.
That I have 'always looked like that'.
I want the questions.
How do you stay so fit?
I want people peering into MY grocery cart. (anybody else do this to poor unsuspecting, skinny women in grocery stores. I had to know what magic food they were buying...in many cases not much different than what I was buying...it was HOW MUCH they were eating that made the difference.)
I just want that feeling once...that feeling where you walk out of the house in the morning knowing for sure, that you are not going to be the fattest person there. That you look good, D*mn good. The time I won't be pulling on my shirt to cover my fat on my belly, or to cover my rear. When I finally stop wearing my security blanket (the overshirt).
I am 80 lbs away from that goal, from the rest of those things...I don't know. Will I feel better at 150, maybe.
Well, I Hope you all are pulling towards your goals. Don't let time get to you. I know it feels looooooooooooong. But you are alot further than you were.
Imagine if you hadn't started...How would you feel then?
Hugs,
Chris
Posted by Christine at 9:29 PM

Honey, you are already there. It's just a matter of your body catching up. If you get your head in the right place (and I think yours is), your ass will follow.

You are The Champion of the World! (I love some Queen, too)

Trust me, some of those skinny women are already looking at you and thinking - "How the heck does she have more stamina? She's in much better shape" Just keep proving that part!

You have such a brilliant attitude! It is frustrating to work hard and still see flab..bla..I have to keep telling myself I didn't get overweight overnight (though I can't remember at time when I felt "thin" but that's another story..) so the weight's going to have to go slowly as well.

L.O.V.E. your attitude!
I know what you mean about proving people wrong. When I went for a fitting for my bridesmaid's dress at around 15 pounds down a few months ago, I felt great. Until the fitting person commented on my disproportionate body and big hips. If she hadn't had the straight pins, it would have been on.
Now I want to go back to the store, try on every size 4 there, make her think I'm going to buy something and then say, "Well, I'm so disproportionate that I don't think anything in here will do" and then leave with dresses all over the fitting room floor.
I'll never do it, but I really, really want to.

Yo Chris! You brought to mind a couple of skinny BITCHES in my community who totally peaked in high school and have nothing to offer but dumb blond heads with hair neatly coiffed around their tennis visors. Am I bitter? Not any more, but I do look forward to being as evolved as I am, AND in good shape, so I can give them the stink eye next time we meet.

I bet you'll be below 200 before I return from the DR! You rock, sassy lady ;D

I just want to say thank you SO much for this post. I read it at a very weak moment. Now, I can blare some Queen, take a deep breath, and resist temptation.

Chris, I was going to comment on several things in this post, then I decided the best thing to do was just to tell you great post, which it is.