and the hits just keep on coming..
something is wrong with the new fridge.
Our old fridge 'burned out'..
we have had this one for about a month and a half and it is doing the same thing.
We t hink it's an electrical problem.
that's the sound of my echoing bank account.
??????????????????
I would think this was some sort of punishment, but no...it's just my bad luck.
oh well.
If this is the least of my problems...(knock on wood)
then my problems aren't so bad.
I won't be posting this weekend.
mostly because I will be busy working...
I will be commenting..but not posting.
did my walk today and that was about it.
spent most of the day walking around the house with a volt meter trying to find fluctuations.
Will still be calling an electrician..
again
@*#&$!!!! >:0(

oh, I wanted to give a big shut out to LISA!!!!
Ya'll, I have been reading lisa's blog for a coon's age.
i have watched her struggle and fail, and then get up and try again and again.
lisa has lost 30 lbs in the last 6 weeks.
If you all could go and encourage her, that would be fantastic!

and four questions from Jen from cankles and carrots (love the name)
1. What novel has influenced you the most?
to kill a mockingbird..because of atticus finch. There is a part in the book where he takes a gun and shoots a rabid dog. His kids had no idea he could shoot that well. There were numerous reasons he didn't brag about his gift at shooting but hte one that stood out the most to me was that he didn't feel he should brag about something God gave him...he didn't earn it, it was a gift. From that I took a lot of life lessons. That we have no talent but what God gave us, and to get a big head about it is the height of arrogance. We should be thankful, we should use it, but know that God gave it and God can take it away. I also learned that humilty is much more becoming than pride, that you lead by example and not words. There are so many things that I learned from that book I could be here all night.
2. What was your favorite childhood toy?
My grey and red sock monkey my aunt susan made me.
3. What's your dream job?
I would love to be paid to travel the world and try out resorts and local food and entertainment and write about it. I am just positive there is a job like that...lol.
4. What destination would you want to visit? Pick one that you've never been to before!
Andalusia in Spain 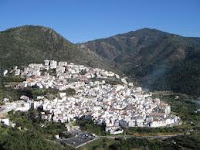 Have a good night.
Hugs,
chris
Posted by Christine at 11:25 PM

And just so you know... I leave your blog open so I can listen to your play list while I'm reading other blogs. Love it!

Hope your luck changes, and quick! I used to feel that sometimes life was out to get me, like it was personal or something. Only recently get that it happens to all of us and that it is not personal, even if the 'damage' costs exactly what I just saved up for some other purpose!
And here I thought I was the only one leaving your blog open to listen to the tunes...
Have a better weekend, Chris

After an almost 3-month fight with my 3-year old washing machine, various repairmen (who said nothing was wrong) and Whirlpool, the company has just given me a brand-new machine for the cost of a 1-year warranty. Complaining on the Internet works.

Unfortunately, I am now in fridge purgatory too. Lots of money spent on repairs that seem to only last 1-2 weeks. My new repairman (I like him), said the latest fix might not last either. If we can get another six months out of the fridge, I'll be happy (it's too old to complain about on the Internet). Otherwise, we'll have to buy a new one. Kaching!

Chris, I am so sorry to hear you are being hit with more troubles. Keep your chin up. It will pass.

Ugh! Electrical problems. I hope that you get them all worked out, soon.

I read Lisa and I am so. thrilled. for her.

Bummer I hate stuff like that. Hope you find the problem without it costing a fortune!!

i will go over and encouage lisa>>>that is my thing, yep it is, and about the fridge , we bought a little red radio and the tube was too hot and 3 radios later the tube was still too hot

I also love To Kill a Mockingbird and remember that scene well. To me it read another way as well: that Atticus took his firearm very seriously, not as a toy. He did what he needed to do. He didn't mess around with it, he didn't show off with it, he understood the seriousness of it and he also knew darn well how to use it.

Sorry about the crappy luck. I certainly know what that is like lol. The universe seems to know exactly when I have a modest surplus in my bank account because inevitably something happens that requires I spend that surplus on boring stuff like car repairs, home repairs, medical bills, etc. I'm very thankful though that we always seem to find a way to pay. It is certainly better than having stuff happen when you DON'T have the money to take care of what needs to be taken care of!

I LOVED what you had to say about To Kill a Mockingbird. I may have to read that book again. Maybe that will be the next chapter book I tackle with Tanner :)


thats what everyone has been asking me about the cake

its better than regular cake lol

hahaha...i leave your blog open to listen to your playlist, too.
ugh about that fridge. i hope everything gets resolved soon.
and i love atticus, too.
that book is one of my favorites.

LOVE, LOVE your perspective on our talents and gifts!! I know it's the truth, but it helps to be reminded. Daily.

That dream job of yours (mine too!)? It does exist, and this little blonde, Samantha Brown, already took it! We watch her on the Travel Channel every now and then, and I'm usually stricken with envy :( Guess that's her gift, not mine, eh? ;)

Hope that your electrical problems are on the mend...

Like you, my most favorite book of all times is TO KILL A MOCKINGBIRD....Classic!!!! (In fact, I think that our next pet, with your encouragment will be Atticus...:)). Anyway...great read...in fact, I am certain that I am going to have dust off the cover and read again--:)