I had a really good workout tonight.
I did 45 minutes on Christian and then walked for a half hour on the treadmill.
Then I did 105 situps and stretched...kept my calories to 1510 all together.
I weigh in at night at 197.
on a side note...the men may want to leave off here...lol.

I just watched 'a long hot summer' with paul newman and joanne woodward.
Paul Newman was a hottie back in the day...
He's gone now...
I've always had a thing for older movie stars....
For the longest time it was Robert Redford and William Holden.
William Holden from Picnic..Which if you've never seen, you should.
To say they don't make em like that anymore would be an understatement...
forgive me fans of brad pitt....but he always seemed a little pretty to me.

I think the closest we come these days to old school movie stars would be clive owen and gerard butler. And of course Christian Slater, but only when he is all dirtied up...think 3:10 to yuma...Batman is good as well.

Men these days tend to be a little, well....."manicured" for me.

Here is a picture of a young paul newman... 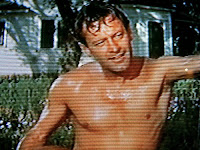 Dollars to donuts he plucks, does a facial and uses moisturizer.


My daughter told me the other day that she can't find a boy to like because she is tougher than most of them...
I have to say, I had the same problem.
I don't want to be able to hip toss my significant other, if that makes me 'old fashioned' so be it.
I am so glad I don't date these days, because if the boy showed up at my door with black nail polish and eyeliner, I'd ask him if he wanted me to hold his purse while he went to the rest room.
I know i am sounding a little bit "get off my lawnish'...I think this happens as you age....the grumpies set in.

You see, it's not that I couldn't take care of myself.
I just wanted a Man that could protect me if He needed to....
Yes, I want to be strong, and tough and capable.....
But, I want my man stronger, tougher and even more capable...
I was thinking of that today while at the gym...I sometimes wonder what kind of young men we are turning out.
An alarming amount of the young ones I saw did seem a little...
I don't know what you'd call it...hat backwards and immature for their age.

I guess I am nostalgic for a time I never grew up in. You know what they say about the golden age, everyone always ran around complaining about how yellow everything was...lol.
My husband is the old fashioned type. Which is just fine with me, I would post a pic, but I think he's on to me. ( since i ran downstairs and took his pic "just because"...and then he says "you aren't going to put me on your blog are you? and I am all like NOOOOO honey'...smooth ain't I ) I will have to sneak his pic on later.
And if he is reading this, by later I mean never...
(for my readers, by later I mean when he forgets...lol)
He's my old fashioned hottie...I will just say I knew I was in love when we were caught in a blizzard in 1993 in The mountains of north carolina. we were stuck on the side of the road in a snow drift.
He took cardboard from the back of the chevy blazer and put it up inside the truck to preserve heat...He took our drinks and made a little hole outside in the snow to keep them cold.
then he got out and hiked two miles up the freeway to a store and bought us food and brought it back and kept it cold outside as well. Every two hours he would go out and make sure our tailpipe was clear and then run the truck to keep it warm. I couldn't have been more impressed if he had walked on the moon. The next day the snow plows came out and we were on our way....four people died that night on that stretch of highway.
Let's hear it for old fashioned men.....yay!
What do you love about your husbands or boyfriends....or if the men have stayed around this long (kudos on your endurance) What did you admire about your fathers?
Posted by Christine at 11:04 PM

I was watching Paul Newman and someone I imagined was Joanne Woodward today while on the elliptical machine, it was on TCM and I couldn't hear because I didn't have earphones. Paul Newman was definitely nice to look at, but I have to say in this movie he was 100 times "prettier" than Brad Pitt.

I don't mind if men break gender barriers, though I do complain that Johnny Depp is too girly. I like men who are calm and grounded.

I was sort of near you during the blizzard of 93. I was on my way back from a spring break road trip. My last stop had been Memphis. I was not paying attention to any news or weather reports and didn't know about the blizzard until I opened my motel room door and saw the snow piled high on my car. I was on I-40, trying to get back to Chapel Hill, but traffic was not going anywhere, so I didn't make it into North Carolina and stayed in Crossville TN another two nights waiting for the blizzard to let up. I saw many many cars that were snowed over on the side of the road. My car, as I'm suddenly recalling, slipped off the road a bit even at 3 miles an hour at one point, and the truckers behind me (it was mostly all truckers on the road, seems like) got out and pushed me back on the road.

yes it was very scary....We were all the way up in the mountains when it dumped on us...it went from cute snow to frickin scary...Glad you didn't get any further.

I love a man that is a complete gentleman. My husband still opens doors for me and basically, treats me like a queen. I tell my daughter all the time, when she is old enough to date, if a man doesn't treat you like a queen, move on.

I totally agree that Brad Pitt is way to pretty. I don't know if I would want to date a man who was prettier than me. (Sorry Angelina. LOL!)

Your husband is awesome! Fortunately, I have a BF who is 6 years younger than me, but acts the same age. He is a total gentleman! I admire my dad the most. He is perfect!

The only part I don't understand about your blizzard story, Why did you have to stay in the car all night if he was able to get to a store that was obviously open?
Just saying....


Anywho, sounds like real man to me. And I agree with you about today's young men.

I call those new men "soft men." I wish my husband would care a little more about his wardrobe, but I realize that if he was a perfectionist about his appearance, he'd probably also be more judgmental about me!

No hubs or boyfriend. Haven't had one in years.

You might want to be taken care of, but you sound like the kind of girl who could stand on her own 2 feet. That's a good thing.

I love the "caught in the snow" love story. That's one to pass on.

Keep up your awesome work.

You crack me up! I love my BF but I know I would more than likely be the hero in our relationship. lol I have a tool box, I put the Ikea furniture together, I hook up all of the electronic stuff...oh the list goes on.

BUT, my BF is a great provider for us. He works very hard. For three years he studied non stop to get his CFA and passed it with flying colors. I love him for all of the support he gives to me each day. :)

PS...Thank you so much for speaking at my service. LOL I was wiping away the tears (of happiness) hehe :)

A tough man full of vigor and brutal strength is the best kind of man :). A touch of jake gyllenhaal sensitivity doesn't hurt either.

The reason we couldn't go to the store is because it was a very small gas station and we weren't the only ones stuck. There must have been 40 cars stuck on the same stretch of road that night along with semis and the whole nine, The police were busy and there was no one to get us....the police would go by on the snow plow and say when they would be able to get us out.
It was still snowing when he walked to the store.
I didn't think he should go, He TOLD me he was going. He came back with food.

OH I so enjoyed this post. I so agree with you and your "perfect" man. Now, these type of men are far from perfect but they are what I call real men. I'm strong, can stand on my own two feet but I really just wanted someone to take the lead for once, carry the load, and hold the door open for me. My current love of my life fits that bill 95% of the time (at least at the time that I fell in love with him). I like the rough, tough lookin guys (all with a kind loving considerate heart underneath it all) and none of that soft stuff. My BF reminds me of my Dad... my dad was my hero.

Me thinks we are kindred spirits Chris! :)

Awww what a great post. I love that my husband will get up out of bed to turn up the heat or get me an extra blanket or get me a drink or some motrin. I must admit I question if I would be as sweet lol. He also makes breakfast most Sunday mornings which is the best time for someone to fix me a meal since I'm not a morning person. I'll confess too he use to be the one that would run out in the middle of the night to get me those pints of Haagen dazs thankfully he doesn't do that anymore lol. Thanks for reminding me what I love about my husband.

Down with the pretty boys! I thought that was Zac Efron but it'c Chace/Chase(?) Crawford isn't it? They just blend into one and the same.

I used to really love OLD films when I was younger but I don't watch many films of any kind these days...Dirk Bogarde and Cary Grant were my crushes....both of them were gay/rumoured to be gay but they had this amazing screen presence and charisma.

My boyfriend is a big softie, but he can also man up in en emergency. He's the type of person who would do anything for anyone and while I worry that he'll get taken advantage of for being so nice, I'm glad he is so I can keep ordering him around LOL..