Okay,
So I reached one hundred pounds lost..
Whereupon I was going to go out and get a tattoo.
I thought I had it all figured out.
But then I started thinking..
"Hey, that tattoo is a little wordy..."

But Not as Wordy as This. 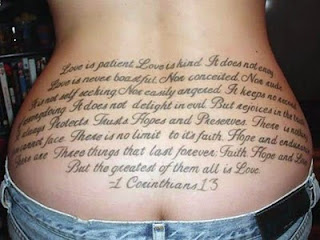 Think she is sending someone a message perchance....

That's one way to win an argument.
I am thinking of whittling the whole
Because I chose to live deliberately thing
down to: 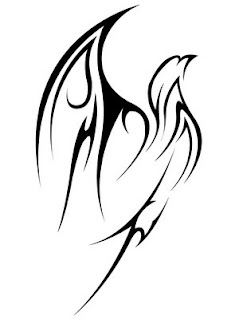 Except I will print out the image and instead of a simple eagle tribal tattoo...I am going to make the lines flames along the lines of: 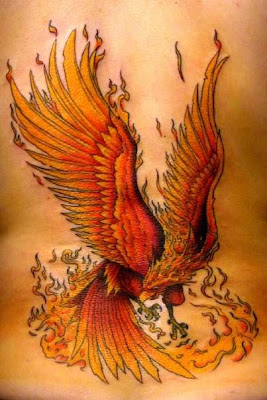 It will be a phoenix...I will be changing the shape of the head and adding in eyes...not black but white with some gold.

Except less feathery and more flamey...I love the shading and the flames around the head, but am thinking of doing black, then purple and then red,orange yellow...like a bright burning flame...I like the silhoutte of the tribal tattoo, the shading the shedding flames which will trail behind my ascending phoenix. I got the color idea the other day in barnes and nobles in the children's section looking at the stuffed dragons in emerald green and cobalt blue and burnt orange...
I also want the tattoo above to be just head chest and wings drifting way into a thin trail of flame...total length no more than 6-8 inches...width 4-6 and it will be going up my left side under my ribs slightly wrapping to the front...the the words live deliberately underneath in script...Not huge...very neatly written.
This way it's easy to cover..I can see it...it's cool and it's private.
And when I die and they are fiddling with my dead body, they can look at the crinkled remains and think...well, I guess she is being reborn in heaven as we speak.
I like it.
I just have to draw it...I can't find a thing I like as well as I like this idea.
It will take me a bit of time to draw it, and find just the right artist to do the deal.
It's permanant.
As such I need to make sure I get a very good artist to complete the work.
I did my 5.6 mile hike today..tomorrow I will be talking about all the exercise I do..
and what in the world I am trying to accomplish with it all.
Have a  great night guys.
Talk at you all later.
Hugs,
Your soon to be tattoo having blogger,
Chris
Posted by Christine at 11:55 PM

Sounds like that is going to be awesome! You'll be the talk of the funeral home when they get a look at that, lol.

I like your idea for your tattoo. It will be beautiful.

I am chewing over an idea for one, been doing so for a while, now. I have time to bring it all together. :D I'll yak about it, one day.

Yes, Chris, that example is one extremely wordy tattoo. Well, at least it's Biblical!

Braver man/woman than me Gungadin! :)

I would be cross, annoyed, angry, even horrified if one of my children chose to have a tattoo.

But I love your idea and think it's brilliant.

Go find the expert you need and don't let them mess with your vision of how it should be.

I'm way too much of a pansy to get a tattoo, but I know plenty of people that absolutely think it was the best decision of their lives - so go for it!

Did everyone skim over the fact that you said you lost 100 pounds???

I adore the tattoo idea---but thats no surprise :)

Look out world, she's going for the ink!

You are fearless in everything you do and THAT, my dear, makes you a Goddess.

Can it get any better than that? Methinks not. Rock that well earned tattoo darling Chris! Wear it with pride.

Can I live vicariously through you? lol I'm too much of a chicken to get a tatoo. I'm sure I'd pass out just as soon as I saw that needle. I love your idea though....it sounds fabulous....and I just KNOW you're gonna' get hubby to take a pic of it for us once it's done, right???? :)

Hee hee! I have to chuckle because there was the very pic of the top tattoo in my tattoo artists' booth that said "Don't be a billboard". Same EXACT picture!

I love tattoos. I have Tibetan writing on both of my inner forearms that translate to inspirational messages. I got the second one when I lost 25 lbs. When I get down under 200 lbs I'm getting my entire back done. I say you go girl!

This picture cracked me up when I first saw it and I was a little concerned that you like it ;) I'm glad to see that you are putting some real thought into your tattoo. I think it will be an excellent way to honor all that you have done for your body. Love your ideas and hope you can find someone who is able to translate your vision accurately!

First of all, conragtulations on hitting your 100 el-bees lost!
You reached your goal before the end of April!
The tatoo is badass, but you know that. Just a little warning I'm sure you've heard: They are addictive. I've got a small one and I've been itching to get another.
Oh, and allejannnnnndrooooo.

Make sure that you check the artist's past work and everything. For something that size and so much detail...you'll want the best.

I can't wait to see the finished product, if you are so inclined to take a photo!

I have a design all drawn out but am to chicken....maybe one day :-)

Congratulations on hitting 100 pounds lost! And your tattoo sounds pretty - I can't wait to see it! You will show us all, right??

You and I have the same idea!! I am also getting a tattoo once I reach 100 pounds lost and I'm only 4.3 pounds away from that! I'm getting a flowery design with 10 flowers-10 petals 10*10=100:) each on my left side between my rib cage and my hip bone. So I will be getting it sooner than later! Good luck and can't wait to see your tat!

I like the idea!
When your ready I know the best place here in town. They have done all but 2 of mine and I wish I had gone to them for the first two.

I love tattoos, they can be as personal or just for fun as you want. But they all have meaning of some kind.

Have fun creating our own body work. It's much better when your able to create your own, that way it truly is YOUR OWN.

Let me know when your ready, I may need another one by then. ;)
We can go together.
amber

Heavens... that is a looong tatoo. I luv how you have really thought about this tatoo and you're right. It's important you find the right person to do the work. I'm so excited for you.

chris. i am all for the tatoo that you are planning to get right now, but please don't get a wordy tatoo on youe bottom>>>if you do, i swear i will never look at it, probably just your sweet hubby>>> i tatoo this internet with my words>>>that is how i will leave my work>>>am thinking of going on my mission soon and that will be a way to tatoo my words in people's skulls>>.i love you>>.the putzp.s. and sweet little amber has tatoos and might get another one>>>i declair

I am anxious to see what your final outcome looks like. Very cool idea Chris.

My opinion...and I'm not against tatoos...but having scripture, religious symbols etc. right above your butt crack really disturbs me!
I knew a girl who put the star of David there, and was so proud of her Jewish heritage. Someone told her, go to Israel and see if they'll all admire the placement of your star of David. I don't think so. Like I said, just my opinion. Feel free to delete!

For a minute I thought that was your backside-I'm so relieved that it isn't! There is something inherently wrong about a biblical quote that extends that close to the butt crack.

Ya know, I was originally going to leave a comment about that big ass tattoo lastnight, but blogspot wouldn't let me...I had something witty and funny, but alas...I am a mommy with mommy brain. (sigh) lol. When I first saw that tattoo, I thought, "Good Lord! What did Chris do?? Then I thought, I hope my butt looks that good after I lose the weight." lol! Have fun getting the tattoo. I think it must be the in thing to do right now b/c a lot of friends have been getting them. I don't like needles, so I usually just go for moral support. lol

Can I just say right now Kim, that I love you for thinking my rear might look that good..
@ Brenda..
I never delete comments I agree with. lol.

Your idea is great. Can't wait to see photos when you ahve it done-you will share, right? lol

I'm *way* too chicken to ever get a tatoo. I have a family member who had the male body part done--eww.

thats some kinda tatoo!! woah nellie! great verse, but not necessarily something i want to inscribe near my......
good luck finding what you want. i had always wanted to do a belly button piercing once my belly became flat and toned, but i'm not sure that will ever happen. My husband isn't into that kind of thing and besides that i've birthed 5 kids so the liklihood of it looking flat and toned is not all that likely no matter how many situps i suffer through ;-) well, i guess we'll see. anyway, i hope you find what you like.

I have to agree with Kim...I thought that was your rear, too. lol. I thought, man Chris got a really long tat! And, look at her curves! lol. Can't wait to see your finished product. Sounds great!

Congrats on the big accomplishment!